Hamilton is a dynamic ‘city on the move’, culturally diverse with many creative industries, people and cuisine from all over the world. In spite of its global influence, Hamilton still has a real ‘heart and soul’ and ‘down to earth’ friendly feel. Hamilton is an active city for people of all ages, offering splendid rural to interesting urban environments throughout our six communities.

The following are profiles of the communities that make the City of Hamilton a rich and diverse place to live, work and enjoy.

Ancaster is home to some of the most beautiful houses in Hamilton. From the gracious older homes of old Ancaster to delightful townhouses just off Wilson Street, to suburban developments located near one of the largest shopping areas in Hamilton, this community offers something for everyone. Established in 1792, Ancaster was originally called Wilsons Mills and served as a key transportation route in Upper Canada, connecting the Niagara Peninsula with the northern interior.

The community offers many amenities. The 21-metre ribbon waterfall at Tiffany Falls Conservation Area is one of the most beautiful of Hamilton’s 60 waterfalls. Ancaster’s Fieldcote Museum houses the Ancaster Historical Society and offers a varied program of musical entertainment during summer months. Redeemer University College provides a university-level liberal arts and science education which is scripturally-directed and explores the relation of faith, learning, and living from a Reformed Christian perspective. And The Hamilton Golf and Country Club, which located to Ancaster in 1914, was laid out by internationally known golf course designer, H.S Colt. It is one of Canada’s finest golf courses and hosted the 2006 and 2012 Canadian Open. Ancaster’s history, traditions and location add a special character to the City of Hamilton, of which it is an integral part.

This beautiful valley town of 23,000 people is bounded north and south by two sides of the Niagara Escarpment with Cootes Paradise wetlands on the east and conservation lands to the west. Dundas boasts a proximity to the area’s natural wonders and a shopping area that combines sophistication with a welcome small-town feeling. It remains one of the most desirable areas in Hamilton to raise families.

Among its many gems, Dundas houses a highly regarded independent art school, Dundas Valley School of Art. DVSA dates back more than 40 years to its founding by two art-minded citizens, Marion Farnan and Emily Dutton, who recognized the need for professional art instruction in the area. With a student enrollment just over 3,800, the DVSA offers part-time programs to residents from children to seniors and full-time programs to area high school students and post-grad students from other universities. In 1998 a new diploma program was launched with McMaster University. The Dundas Valley Historical Society promotes awareness of local history and the Dundas Museum & Archives highlights the stories of people and events that have shaped this beautiful valley town.

With more than 15 communities, all with their own character and appeal, Flamborough has been called a genuine community of communities. Extending 191 square miles, Flamborough takes in urban Waterdown as well as more rural areas such as Greensville. It is surrounded by conservation and recreation areas to offer year-round activities ranging from cross-country skiing in winter to boating and swimming in the summer. Flamborough is a community that cares, with countless service organizations, youth and seniors activities, and sports and recreation programs galore. Flamborough Community Information Services, which gathers together all services available to the community, is celebrating its 30th anniversary. The African Lion Safari is one of the Ontario’s key tourist attractions and opened here in 1969 to offer a new animal-friendly take on the traditional zoo. As the Safari literature explains, animals roam free and visitors are caged! They now have more than 1,000 animals representing 100 plus species and have bred 50 species that are considered endangered or threatened.

Flamborough was founded in 1792 to become a major 19-century industrial and residential centre, with saw, grist, flour and paper mills located in the area known as Crook’s Hollow. The area’s history resides in the capable hands of The Flamborough Heritage Society and Archives. When it comes to natural beauty, Spencer Creek, which originally powered the mills of Crook’s Hollow, also is the water source for two of the areas most scenic waterfalls, Webster’s and Tew’s Falls, located along the edge of the Niagara Escarpment.

Glanbrook is a blend of small town character with a diversified economy and proximity to all the amenities of the big city. Including the towns of Binbrook and Mt. Hope, Glanbrook now encompasses 75 acres and houses the John C. Munro Hamilton International Airport. It boasts employers in industrial, retail and service companies, as well as in the traditional agricultural sector. This community of 11,000 is growing by leaps and bounds as city-weary home buyers are drawn to the area. Major new housing developments, such as the Binbrook Fairgrounds project, are attracting young families. However, the small town character remains in gracious old homes and acres of farmland, as well as nearby conservation areas and nature parks right in residents own backyard. The Binbrook Conservation Area, for example, is a 978 acre tract of land. Owned by the Niagara Peninsula Conservation Authority, it includes the large Lake Niapenco, which is surrounded by open meadows and hardwood forests with many walking trails. Amalgamated into the new City of Hamilton in 2001, Glanbrook itself was brought into existence through a 1974 merger of the townships of Binbrook and Glanford. Dating back to the mid-1800s both townships derived their character from their major industry D agriculture. They even held separate agricultural fairs to showcase their produce. The successor is the famous Binbrook Fall Fair this year celebrating its 153rd anniversary. The airport has also done its part to shape the character of the area. From its beginnings as a wartime training centre, Mount Hope Airport was gradually changed to a public facility, the culmination being its renaming after a local politician who had been instrumental establishing it as an international airport. 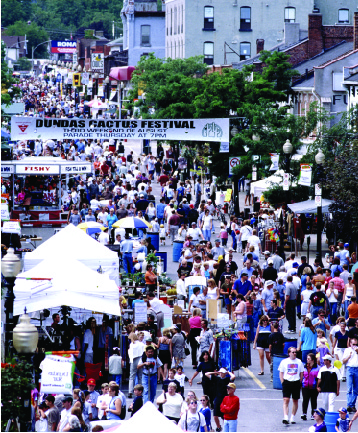 Hamilton is a community of rich cultural heritage, home to both natural and man made wonders. Although its history goes back much further, the City was founded shortly after the war of 1812 by George Hamilton, a merchant, soldier and politician. It has a long history of hard work and ingenuity, and while it has changed and grown significantly over the past few centuries, the City has not lost its down-to-earth and spirited attitude towards life.

The City is bisected into the upper and lower city by a ribbon of wild, green space known as Niagara Escarpment. The escarpment is a 90 metre cliff, which was recently named a World Biosphere Reserve. In the area, more than 80 waterfalls have been identified, plunging over the edge or this natural wonder, which led to the city being nicknamed “The City of Waterfalls”. While the escarpment runs from New York to Owen Sound and beyond, no one is more proud of this geological feature than Hamiltonians, who lovingly refer to it as “the mountain.” No one can resist the breathtaking view of the lower city and Lake Ontario from the edge. It’s probably this feature that has inspired the city to preserve even more green space. Despite being known as an industrial town, the city also has hundreds of parks and conservation areas for residents to enjoy. In addition to natural attractions, the city is home to a wide variety of activities truly encompassing its multicultural roots. From the Art Gallery of Hamilton and the city’s five museums to Hamilton Place, Copps Coliseum and hundreds of festivals and local events, there’s always something going on.

The West End centred around McMaster University, this area is widely known as home to the city’s future, as hundreds of university students flood its ranks in September. But it’s also home to Cootes Paradise, a large wetland at the west end of the Hamilton Harbour and the trendy shopping district of Westdale Village. Westdale was one of Canada’s first planned communities, with work beginning in the 1920s. Hamilton Mountain Living “on the mountain” has always given residents a feeling of distinction. That’s probably because some of Hamilton’s most prestigious families built their manors on the top of the escarpment, overlooking the city. In the present day, it’s a sprawling community with a balanced mix of residential, commercial and light industrial.

Historic Stoney Creek has a long and honourable provenance and is one of the oldest communities in the City of Hamilton. Settlements were first established primarily by United Empire Loyalists in the late 1700s, and residents annually celebrate a key battle from the War of 1812, with reenactments and tours of the Battle of Stoney Creek National Historical Site. Now one of the fastest-growing areas within the city, industry and housing development are attracted by its central location close to the lake. Upper Stoney Creek also takes in a portion of the Niagara escarpment, with access to the beauty of nearby parks and conservation areas as well as the many urban amenities offered both above and below the escarpment. There is a strong tradition of innovation and entrepreneurship in Stoney Creek. The Stoney Creek Chamber of Commerce, formed in 1950, has more than 400 members and a strong voice on the issues impacting the business community. An unusual celebration was born in Stoney Creek in 1969 when the community adopted the idea of celebrating Canada’s new maple leaf flag as a focus for community activities. Held a month before Canada Day, it includes an annual parade and festival. It focuses on a combination of pride in the Canada flag and local civil spirit, as seen in the honouring of the famous 1813 Battle of Stoney Creek. Today, Stoney Creek still retains its historic identify while serving as one of the most populous and fastest growing sectors in Hamilton. 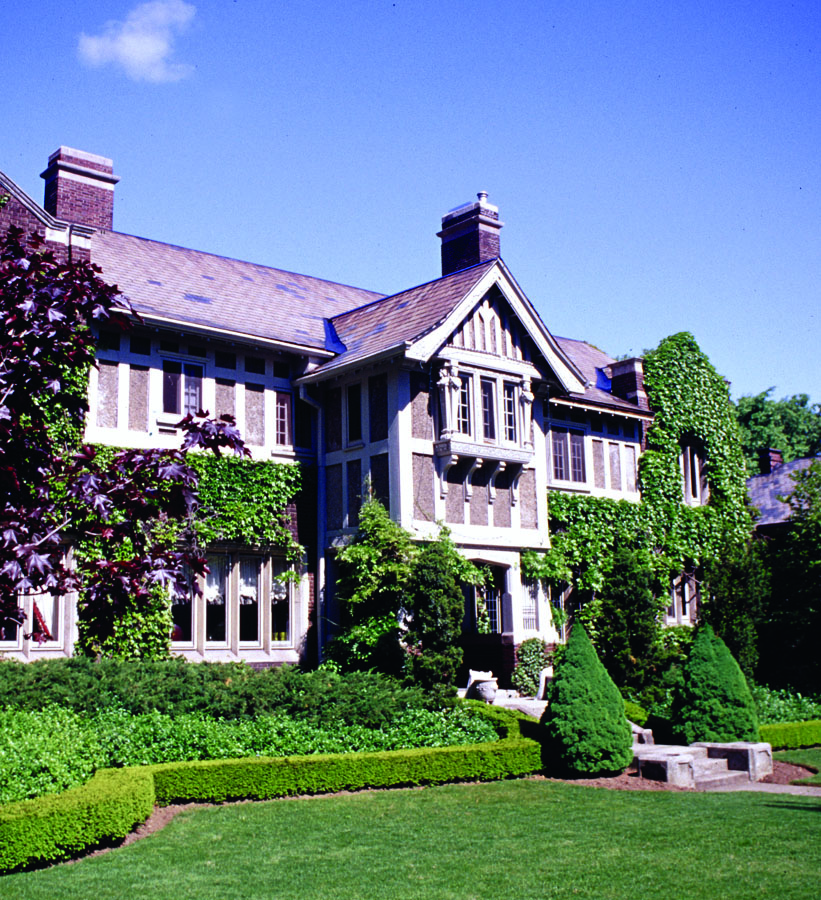